Sometimes in the Wasteland, things can get lonely. After all, you’re wandering across an irradiated hellscape, taking potshots at passing ghouls and eking out your best existence. But maybe you don’t have to be alone! Maybe, just maybe, you’ll find a few people out there who want to stick around for a while. You might even accomplish something great together.

You’re not on your own anymore. Fantasy Flight Games is proud to announce the Atomic Bonds Cooperative Upgrade Pack for Fallout: The Board Game!

With Atomic Bonds, the number of scenarios available to you just doubled. This upgrade pack has everything you need to play every competitive scenario from Fallout: The Board Game and the New California expansion as a cooperative scenario. Rather than struggling against each other, Atomic Bonds lets you and your friends travel the Wasteland, grab the best gear, and push your chosen faction to victory—together! Combine that with the addition of modifications, mutations, and workshop upgrades, and Atomic Bonds pushes your games of Fallout to dizzy new heights.

Cooperate with Your Friends

As a cooperative upgrade pack, it’s safe to say that cooperation is integral to the contents of Atomic Bonds. In fact, this expansion takes the game’s previously released competitive scenarios—whether from Fallout: The Board Game or New California—and transforms each of them into two fully cooperative scenarios! 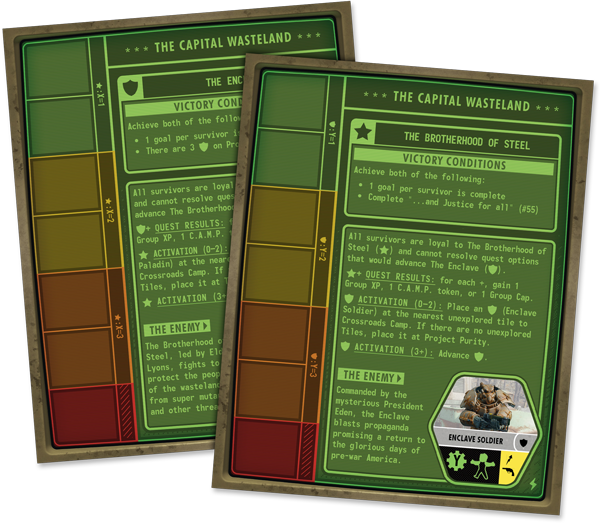 In each of the game’s competitive scenarios, two warring factions are matched against each other. This could be the Enclave versus the Brotherhood of Steel, the Railroad versus the Institute, or another iconic pairing. When you’re cooperating with your friends, however, you’ll choose your side at the beginning of the game by picking one side of the double-sided scenario sheet. Not only does this change which faction you’ve aligned yourself with, it promises to dramatically change your gameplay experience and set your party on a unique path.

Since you and your friends are all actually friends now, you’ll also be able to help each other survive! Whether you’re assisting in combat by firing from afar or setting up C.A.M.P.s for you and the other players to fast travel between, it’s perfectly apparent that teamwork makes the dream work.

Cooperative scenarios aren’t the only change offered by Atomic Bonds. You now have the power to radically change your weapons, your apparel, your workshop, and yes, even yourself! Modifications, mutations, and workshop upgrades are three new types of cards, all offering new perks and powers to you and your fellow players. 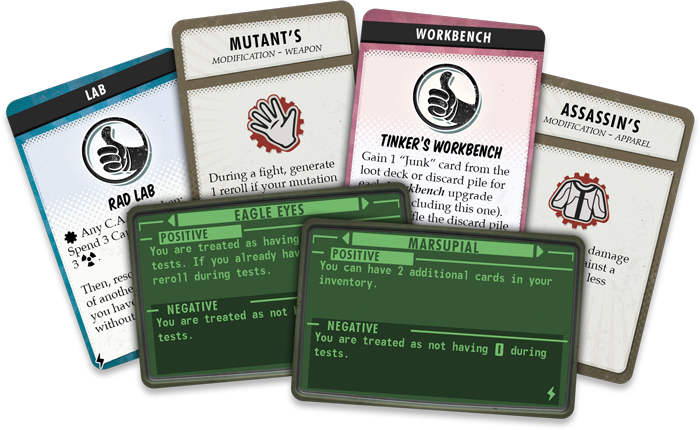 You may find a C.A.M.P. with an attached Chem Lab, enabling you to easily lose the Addicted trait. You may tweak your weapon to be Two-Shot, letting you perform a second fight action for free. Or after taking enough rads, you may suddenly become a Marsupial, giving you additional cards for you inventory, but negating your Intelligence during tests. No matter where your adventures take you, there’s always room for some unexpected change, whether that’s a magnifying scope or an extra limb!

Maybe you’ve already enjoyed the countless dangers and lurking mutated beasts of Fallout: The Board Game. Maybe you were waiting to jump in with your friends. Either way, you’ll find the ideal next step to your journey with the Atomic Bonds Cooperative Upgrade Pack!